Never really though about cars, truck and bus drivers.  They need guidance too, I suppose.  So I followed Luke's idea and the drivers of Garahbara are no longer lost and aimless. :)

I used the catalogue referred to in the video,  zoomed in, "print screen", cut'npaste and cropped etc using Paintshop Pro, and created a MS Word document of correctly sized HO signs.  The posts are 1mm styrene rod painted with a silver paint pen.  The results came up OK.  There is quite a plethora of further signs to come.  Click on the pics below for a larger image.  Comments are welcome. 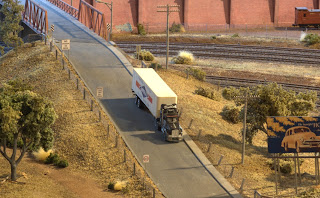 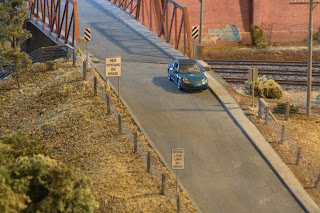 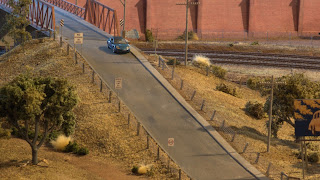 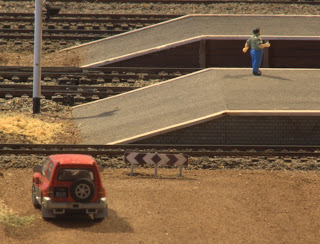 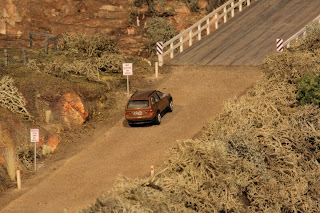 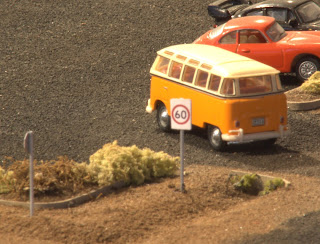 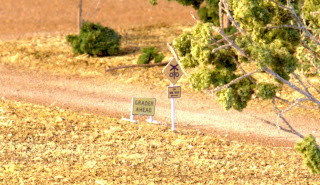 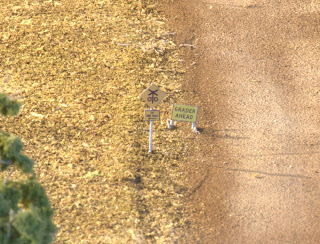 Spirit of Progress takes to the rails

Well, it's been a few months since my last post.  Have been busy sorting out a Spirit of Progress set.  Took a few of my own, and a couple of gifted Powerline S cars, and a Powerline SOP Buffet car.  Did a bit of work on them, based loosely on Graham Brown's article (AMRM Feb 2003).

What did I do?
The SOP consists (so far) of:

Spirit of Progress arrives at Garahbara 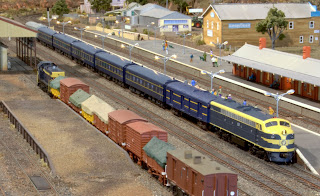 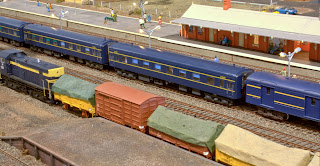 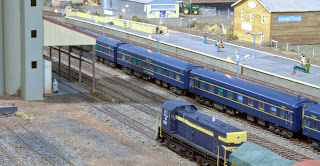 The Spirit of Progress fits just nicely in the platform

Well, it's new and it's a town.  Best I can come up with for the time being.

It's been a while coming, but the line from Garahbara has been re-opened with the station building and platform completely refurbished and restored.

Another Models'n'more kit. "Corowa" this time.

Comes up quite nicely, don't you think? 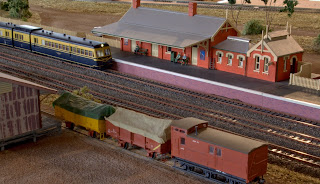 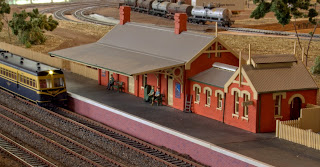 The latest project for Garahbara is to build a Platform Announcements System for passenger departures and arrivals.

I needed to find some platform announcements, and with assistance from the guys at the Railpage Model Railways Forum here .They pointed me at the DVA5 software that generates platform announcements for you. It's limited to mostly New South Wales and Sydney stations and destinations, however served my purpose well.  You can generate the .wav files and play them manually via your computer (or whatever device).  But I wanted more.  Don't we all?

Now that I had the announcements, how to get them to play accordingly......... without having to manually find, and click on .wav files!

So what can JMRI offer me (which I already run)? So I went hunting through JMRI.

Under JMRI Panel Pro, there are a number of "tables".  (Click "tools" -> "tables") and create an "internal turnout".  Name this turnout the announcement name.  eg.  Train departing platform 4".

Next, setup a "Logix".  Add a new "state variable" and the trigger being the "internal turnout" you just created.  Then add an "action" to the "logix", where you play a sound file when the state of the "internal turnout" changes. A "Logix" continually monitors the status of the "turnout" and will trigger the "action" when it detects a change.

This is a very brief explanation, so I'll put up a detailed "Tutorial" page at some stage.

But I still wanted more!  I wanted to trigger these announcements without having to go back to the computer, and click on stuff.  JMRI has a WiThrottle. JMRI Engine Driver at  JMRI Engine Driver. It uses your phone/iPad/Tablet as a DCC throttle.  So for the cost of a wireless router ($45, I could have used the one in the house, but it doesn't reach as far as the train shed), and $38 for a DGTEC Android tablet (on special at Woolies), I had my WiThrottle. (or you can use your existing phone).

Et voila!!!  Wipe across on the tablet/WiThrottle to "turnouts", press the relevant announcement and Bob's ya uncle. :) Wipe back to the WiThrottle for the train, and "TOOT"  off ya go!

But I wanted more!  Yes...... more than the free set of steak knives?  I wanted to trigger a series of general announcements, or random/timed announcements, such as "All buses leave from outside the station" or "Book your baggage in at the parcels office".

JMRI tables also have "routes" where you can list "turnouts" to be set, and a timed interval to set each turnout on the list.  List all your general "announcement turnouts" in the "route", and trigger them at say, 10 minute intervals. WiThrottles also list "routes", so you can trigger the "route" as well.  A "general announcement" will play every 10 minutes, or whatever interval you like.

I've also got it working using JMRI Virtual Sound Decoder, where the announcement can be triggered from a Function Button on your throttle.  eg.  F1 = headlight and, F10 = "arrival announcement",  F11 = "departure announcement" etc.  But the "how to" on that, is almost an encyclopaedia on it's own!.

This is what I've done so far.  Wadda ya reckon?  You may need to turn your volume up a bit.

A day out track side with HDR photography.

What a lovely sunny day.  Thought I'd go out with the camera and follow the afternoon service to Garahbara for a bit of trainspotting.

These were done using HDR (High Dynamic Range) pics and a bit of PaintShop Pro.  Still getting the hang of it, but more practice to come,

HDR is where you take 3 or more pics of the same scene.   It is used where you have a high contrast of light and shade.  Very bright areas and very dark areas in the same scene.  I've used 3 pics.  One under exposed, one normal, and the other over exposed.

HDR functions of PaintShop then combines all three images, taking the appropriately exposed areas of each pic, giving toned down bright areas, and lightened up dark areas.

Example:  When you take a pic of a loco, the underframe and bogies (which are usually black) are dark and you don't see much detail.  So you "over expose" the pic, which then gives you the details of the bogies/underframe, but the rest of the pic is over exposed.  HDR functions then combines multiple pics giving an overall even exposure.

When I get the hang of it, I'll put up a page on how it's done and the steps involved. 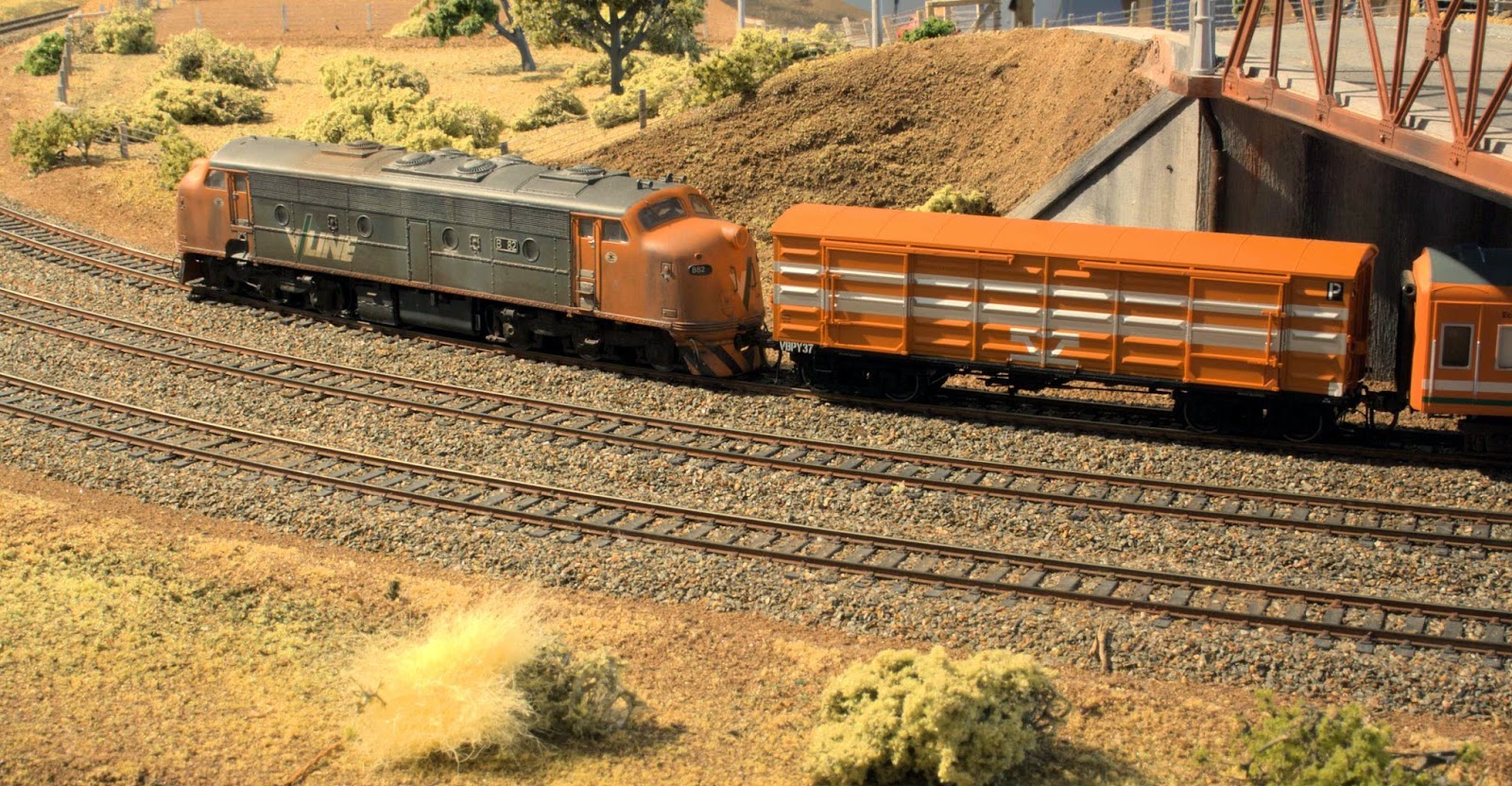 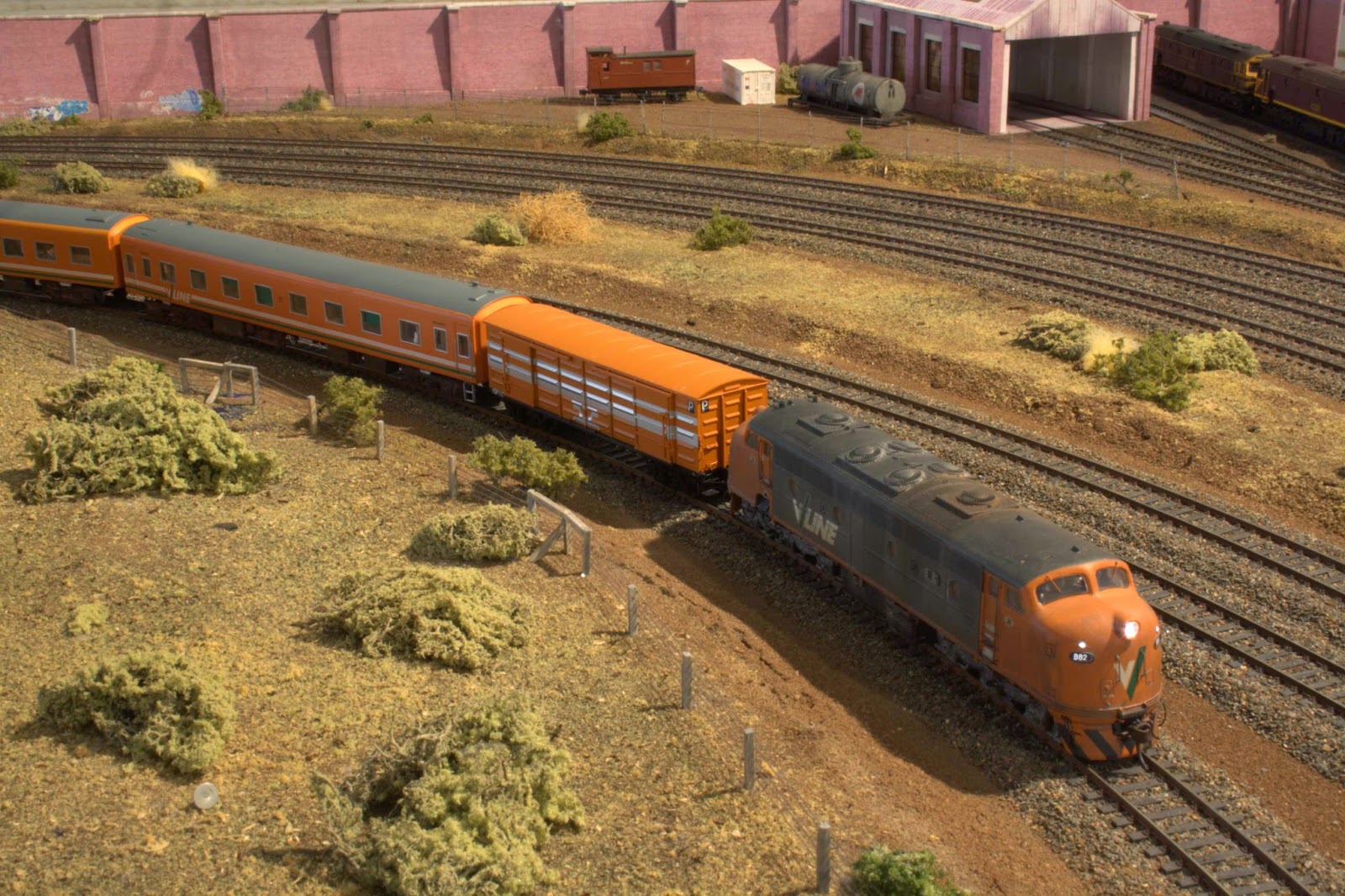 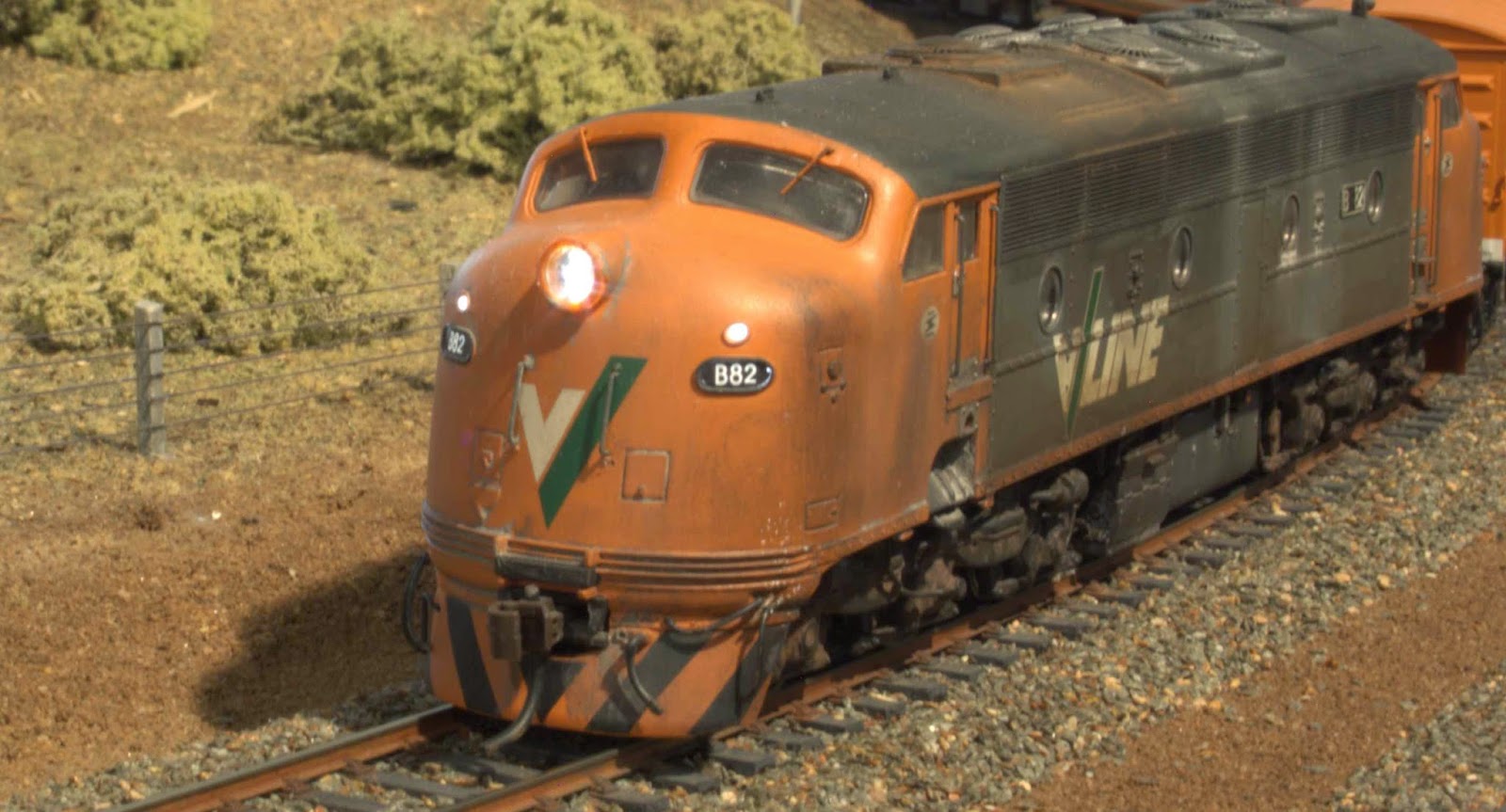 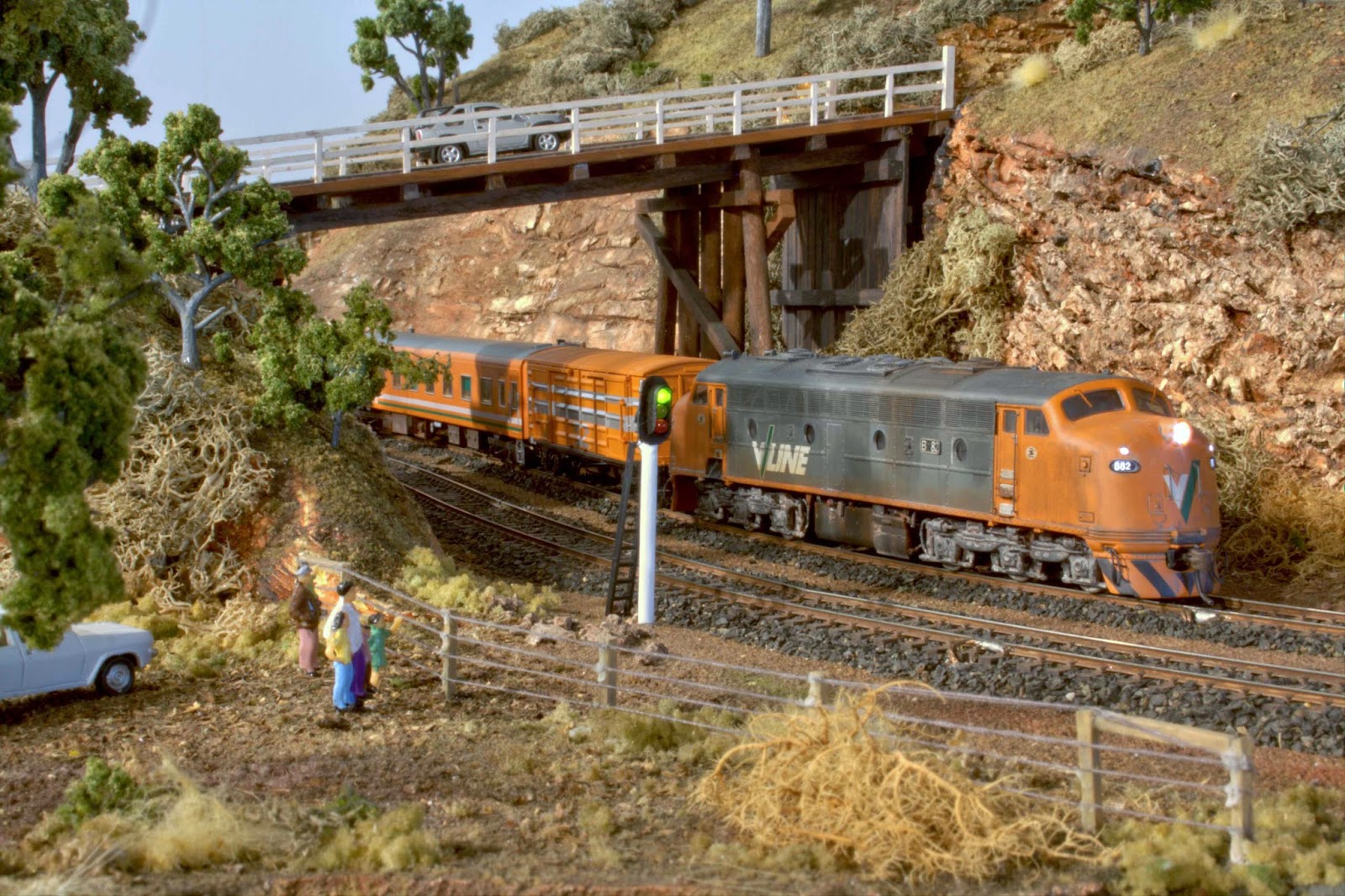 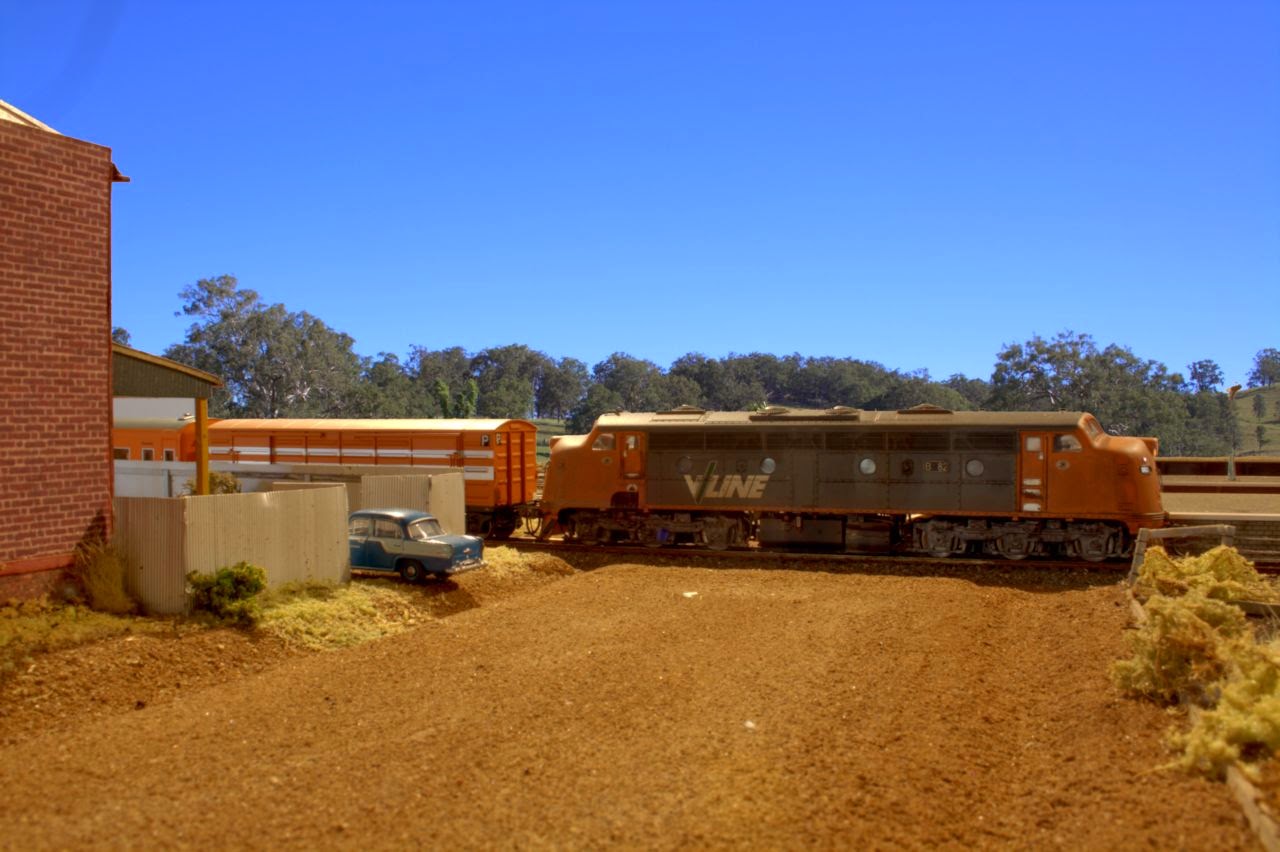 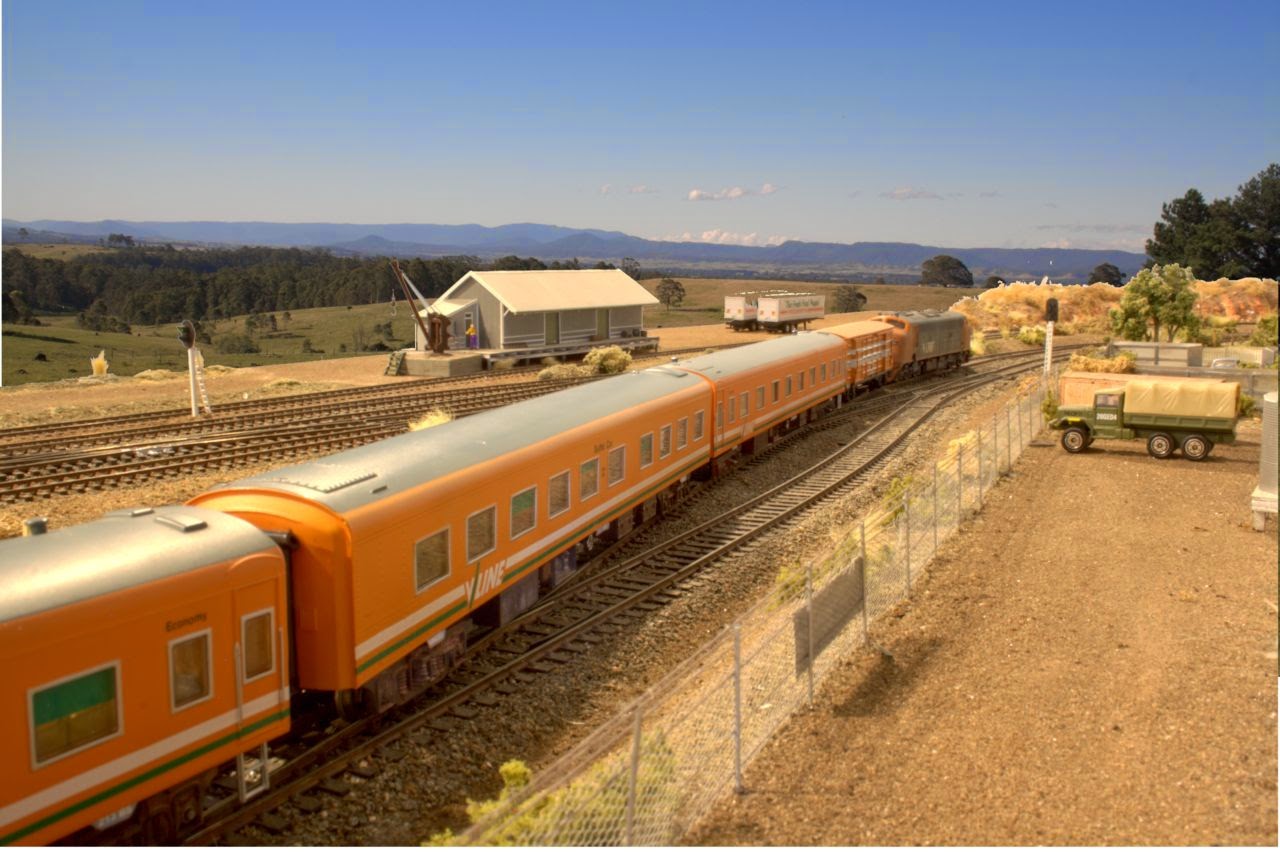 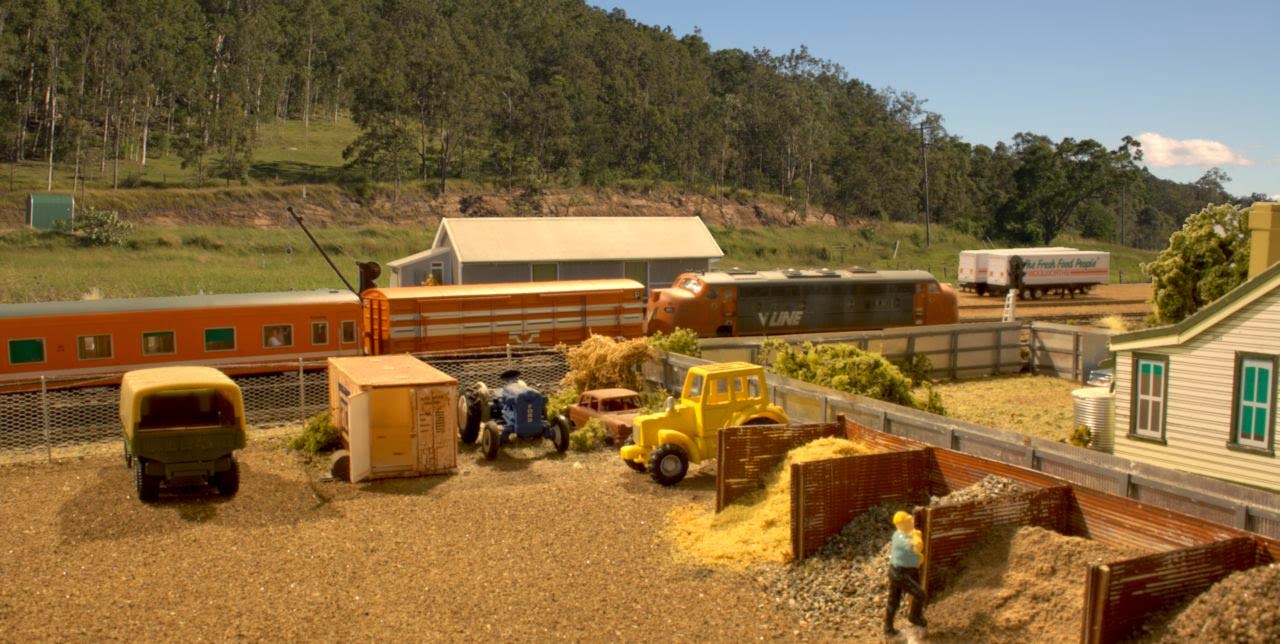 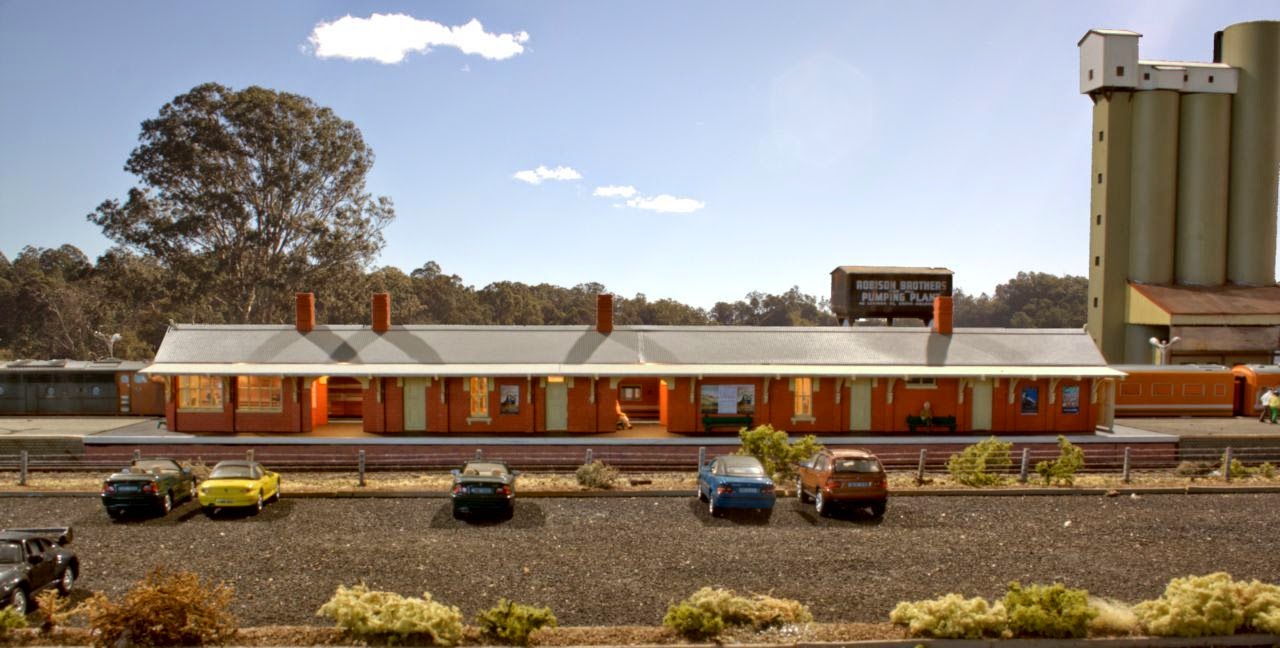 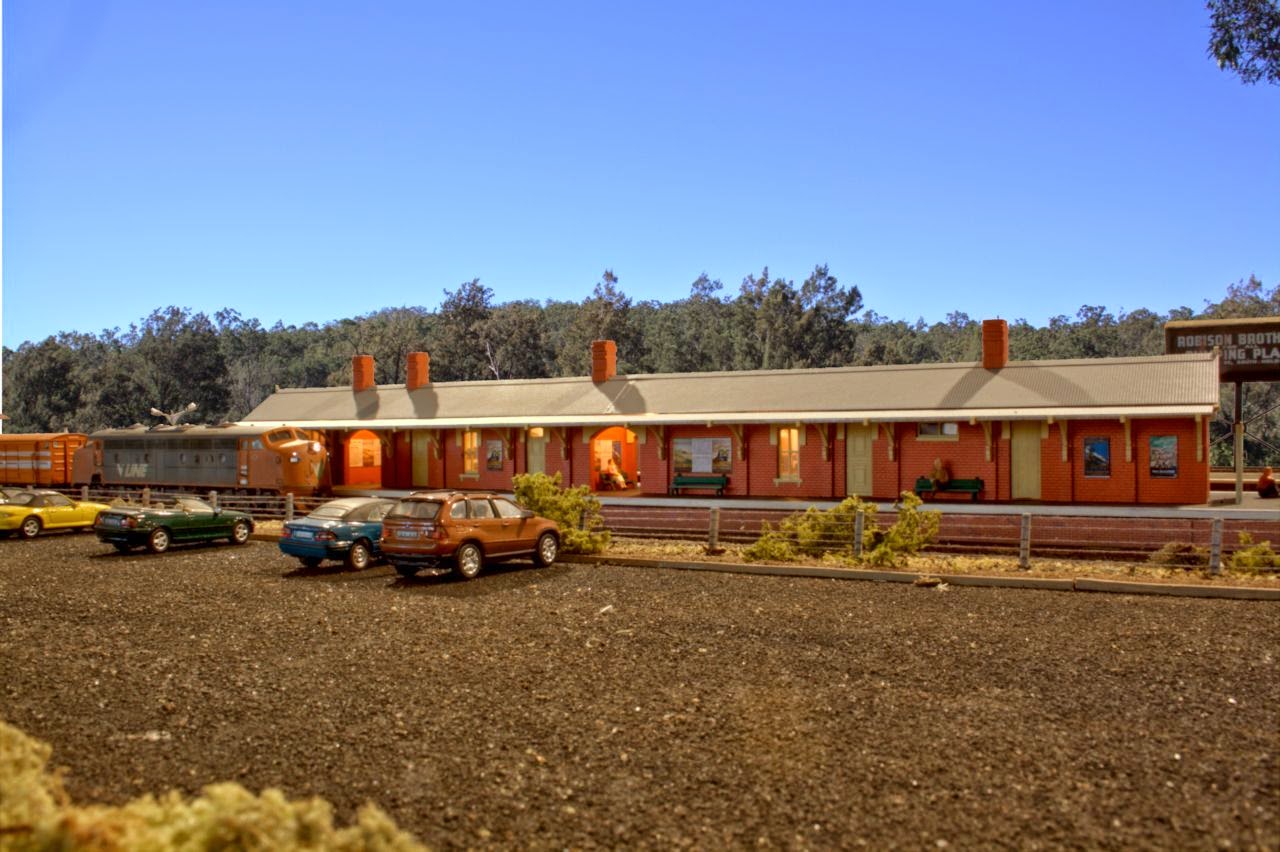 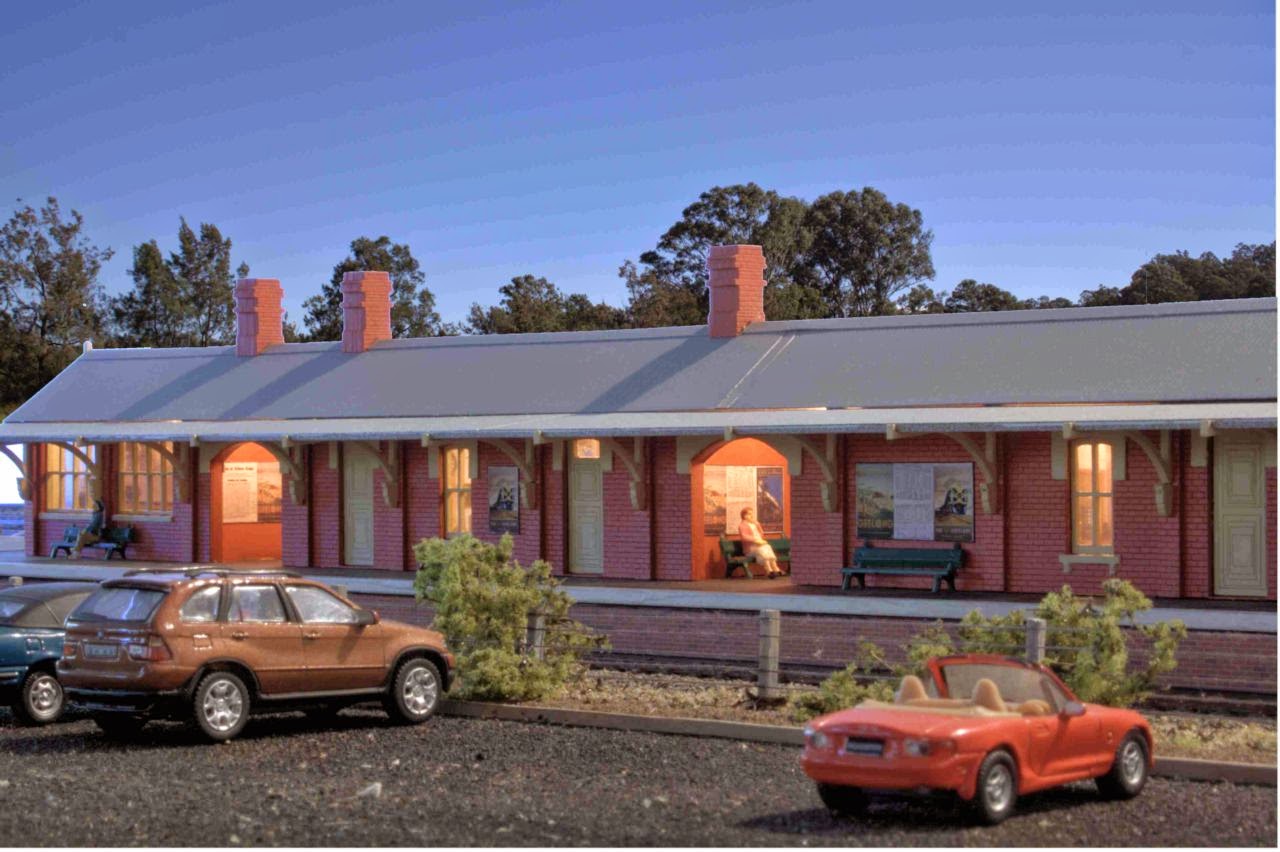 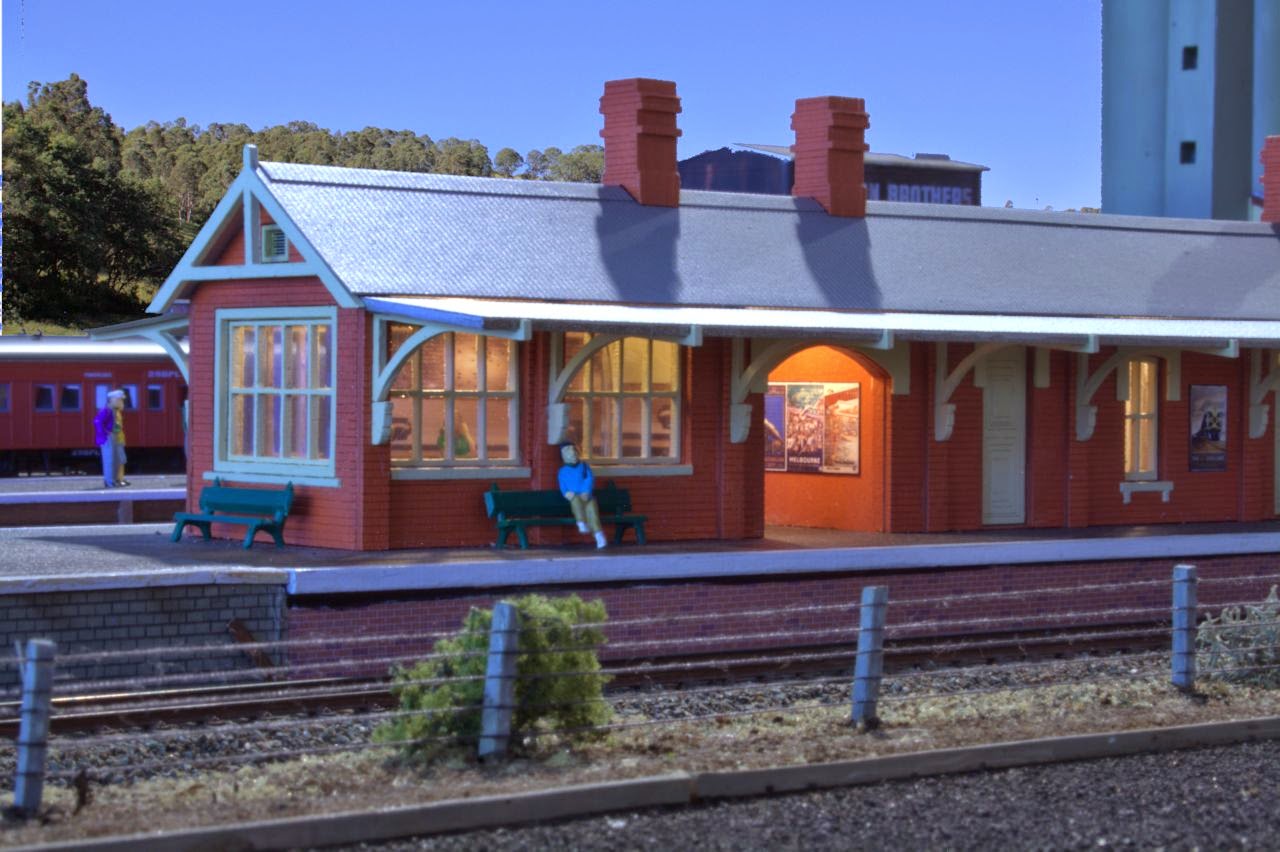 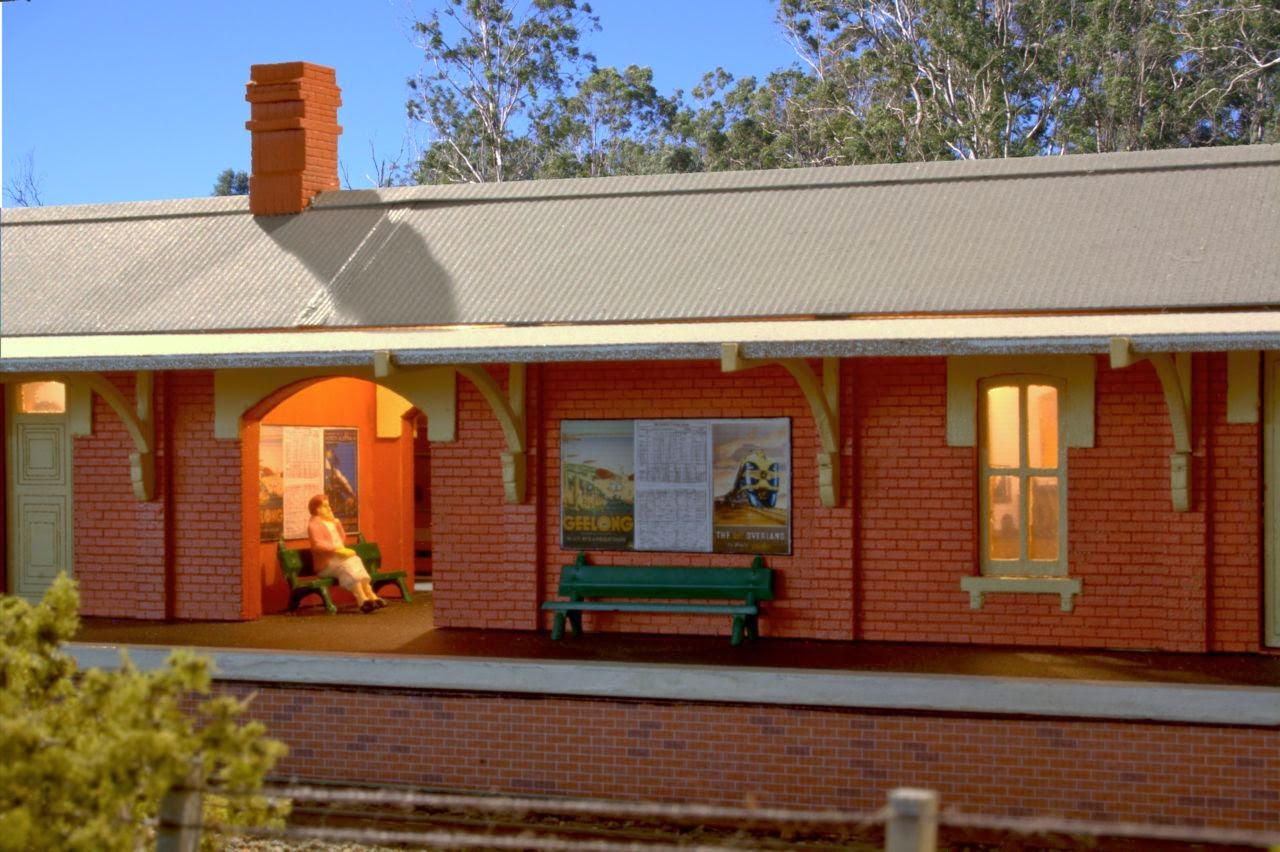 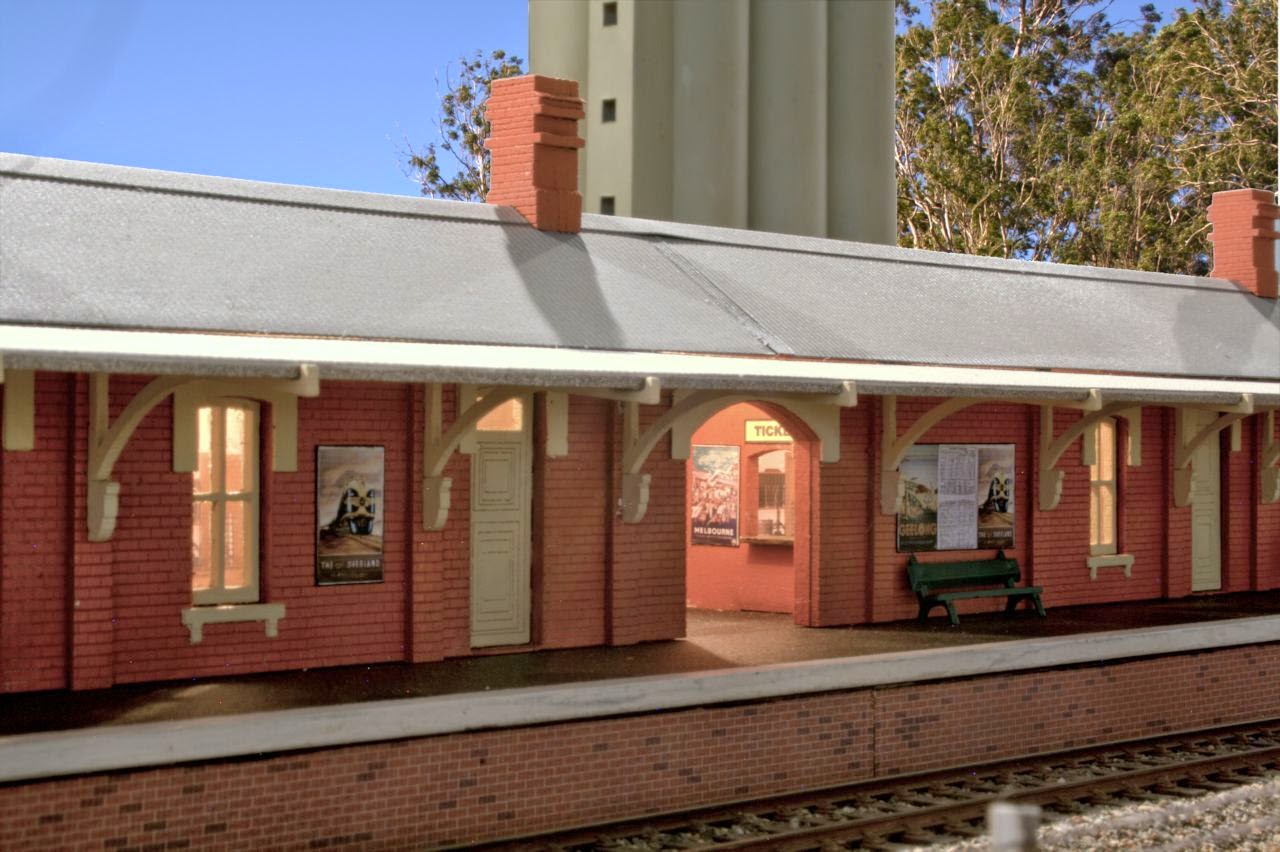 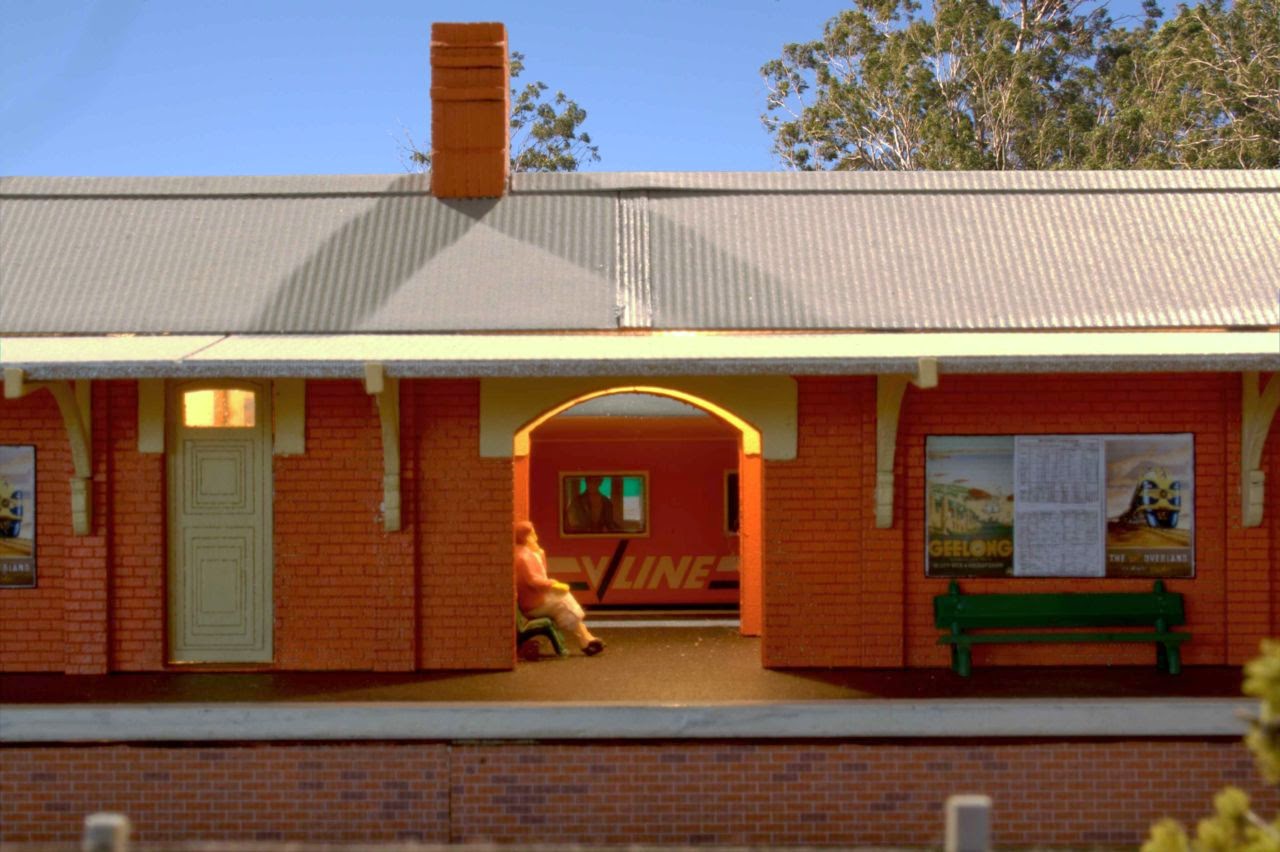 HAILSTORM HITS GARAHBARA - NOT MANY DEAD

A massive hailstorm hit Garahbara this afternoon with hailstones the size of buses and cars. Our man is on the spot for this exclusive report. 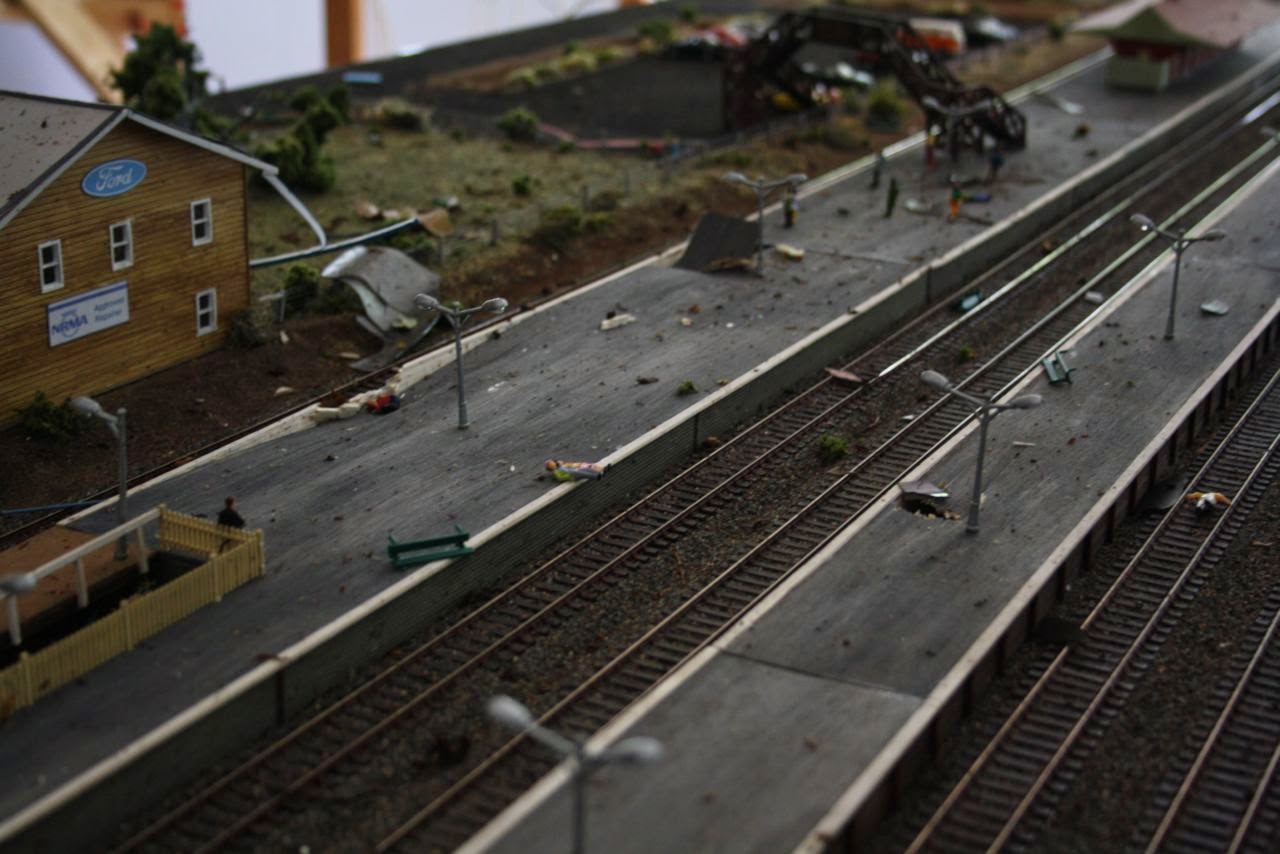 Destruction rained down on Garahbara this afternoon, for more than 30 minutes on this busy rail hub and transport centre.  Garahbara's recently installed protective shielding of perspex skylights, designed to protect Garahbara in such an event, was no match for the forces and havoc that nature can deal out to us all. 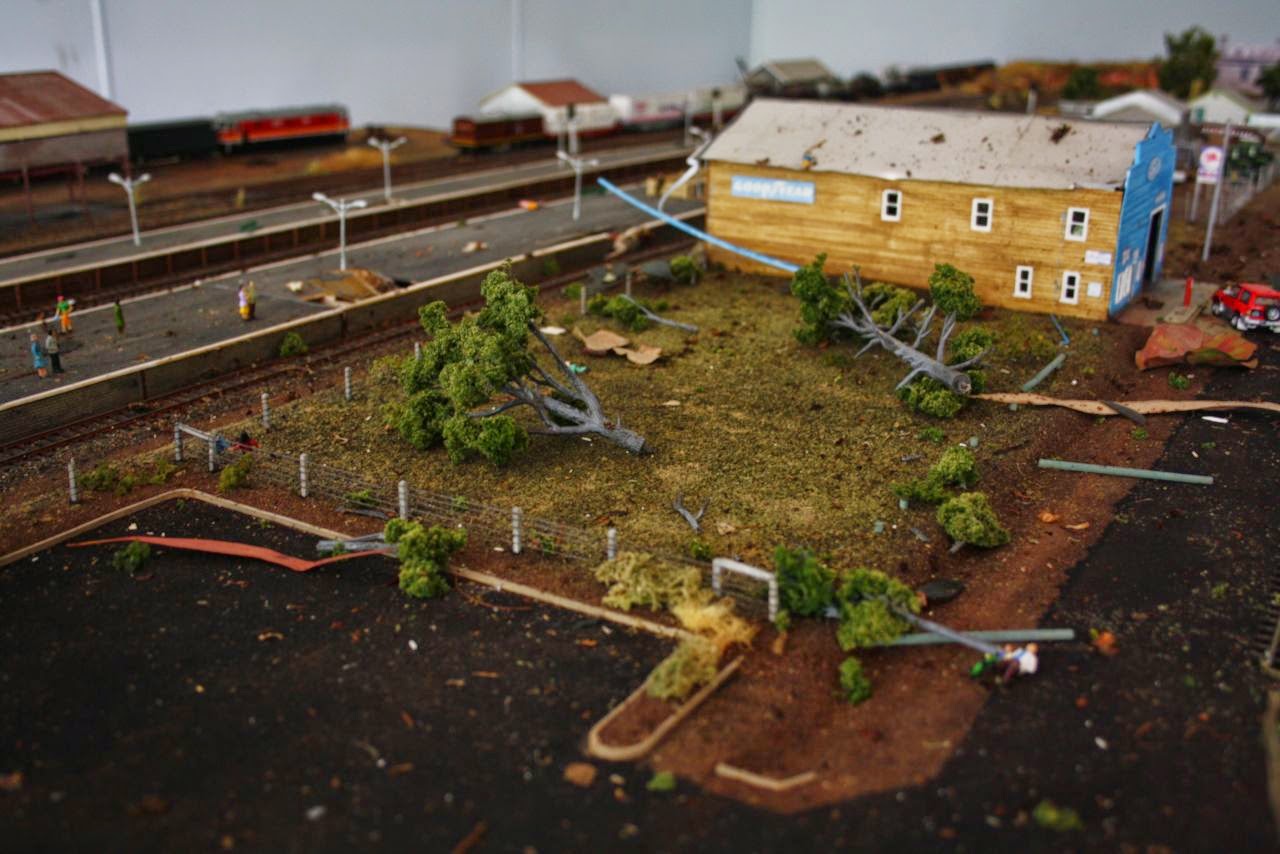 "The destruction was extensive" said Mr L. P. Being.  "Many of my close friends and relatives did not survive. However I do believe most of my fellow Being families, and Garahbara, will rise once more, with the help and financial assistance of the Humbrol Foundation, the Superglue Institute, the Hobby Knife Academy and the Hoover Vacuum Corporation.

Mr Being provided us with this exclusive footage of the disaster.

Stay tuned for further updates on the disaster recovery effort.

Alan Wood
Northern Rivers, NSW, Australia
This blog is about the construction and progress of Garahbara, my HO model railway layout based on Victorian and NSW railways of the 1960s to 1980s. A work in progress, of course. There is always something that can be done. :) Garahbara means "meeting place" in the local Sydney Daruk Aboriginal language. From Garahbara comes the word corroboree, meaning "meeting".